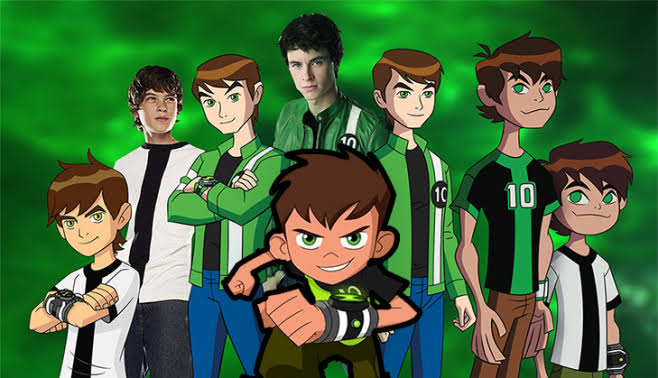 When we talk about our childhood, mehn! It’s full of fun. It was definitely the best part of our lives. This so call mature stage aka Adulthood is a scam.

You have to do everything yourself, no money, no more candy and whenever a visitor comes visiting, no more money for you as per “you’re a grown up.” 😏

Here are list of cartoons we all were obsessed with and we actually miss them so much. If you haven’t seen at least 7 of them, you belong to the “Indomie Generation.”

Every kid knows of Ben 10 as he was their favourite hero. Imagine having to choose from 10 different aliens and save the world. Back then, it’s was a favourite cartoon for every child.

Some actually said Ben 10 could defeat super man. What?

Ten-year-old Ben Tennyson discovers a mysterious device named the Omnitrix on a family vacation. The device (watch) allows him to transform into 10 different alien forms replete with unique superpowers.

The first episode of the cartoon was shown on the 27th of December 2005 on Cartoon Network and the final episode was shown on 15th April 2008.

While Ben 10 is a boy favourite cartoon, PowerPuff girls was for the girls, Though the boys also loved the cartoon.

Description : Accidentally created in a lab by Professor Utonium, superpowered sisters Blossom, Bubbles and Buttercup regularly save their city Townsville, from evildoers such as Mojo Jojo, the Gangreen Gang and Him. Blossom is the self-proclaimed leader of the trio, Bubbles is the cute one and Buttercup is the toughest one.

Water, Fire, Earth and Air. Long ago bla bla bla bla. We all know the intro. Avatar was one cartoon you could watch over and over as it was one of the cartoons that has everything in it. Talking about Action and Comedy.

Description : A young boy with the ability to manipulate natural elements wakes up from a 100-year-long hibernation. He then sets off to use his mystical powers and save the world from destruction

Quick question : If Ben 10 and Avatar are to battle, who do you think will win? Drop your comments in the comment section.

Who is flash beside sonic 😏? This was one of the favourite cartoon on KidsCo.

Description : Sonic, Manic and Sonia continue their fight against Dr Robotnik to bring peace to Mobius .

Mehn! Turning from humans to dinosaurs is weird, but who cares! The cartoon was super fun as it is amazing to see those transformation.

Description : Five teenage friends learn they have the power to transform into dinosaurs. Their science teacher, Ms. Moynihan, may be the only one who can help them stop Victor Veloci, who takes the form of a velociraptor, from bringing back the Age of the Dinosaurs and speeding up global warming. The Dino Squad has just one mission — protect Earth!

Description : Rex is far from your average teenager — infected by nanites, he’s turned into an “Evo,” with the power to grow machines out of his body. Unlike other Evos, however, he can grow them to suit a specific need and then reabsorb the machines back into his body. He can also communicate with other machines, and he does his best to help cure Evos of their mutations. Recruited by an organization called Providence, which is dedicated to stopping the Evos, Rex investigates other biological mutations worldwide.

This was our fast and furious back then as it was the best racing cartoon on KidsCo.

Description : This animated series, adapted from Bob Kolar’s book “Racer Dogs,” features canine buddies Dash, Mags, Strut, GT, Stinkbert and Clutch. The dogs learn lessons in fair play and teamwork as they pull together to protect their reputations as the fastest dogs in Racerville.

In this anime adventure series, a bunch of more-than-ordinary playing cards drop from the sky, landing all over Earth. A group of friends who pick up the cards — Dan, Bruno, Marucho, Julie, Shun and Alice — team up to become the Bakugan Battle Brawlers. The Battle Brawlers must assist in the battle between good and evil in a parallel universe. As they learn more about the cards, they discover more about the power struggle in the alternate universe of New Vestroia, and do their utmost to help the Bakugan there win the day.

Friends yet enemies! Tom & Jerry gave us all the joy and fun moments. Even this present generation knows of Tom & Jerry.

The series centers on the rivalry between the titular characters of a cat named Tom and a mouse named Jerry.

And in others, here comes Power Rangers

While every kid is obsessed with cartoons, Power Rangers was one movie that got us going. With different series such as SPD, Mystic Force, Time Force, Jungle Fury, Dino Thunder, Wild Force, Lost Zeo and the one this present indomie generation might know of, Power Rangers Samurai.

In this article:Entertainment, Movies, TV