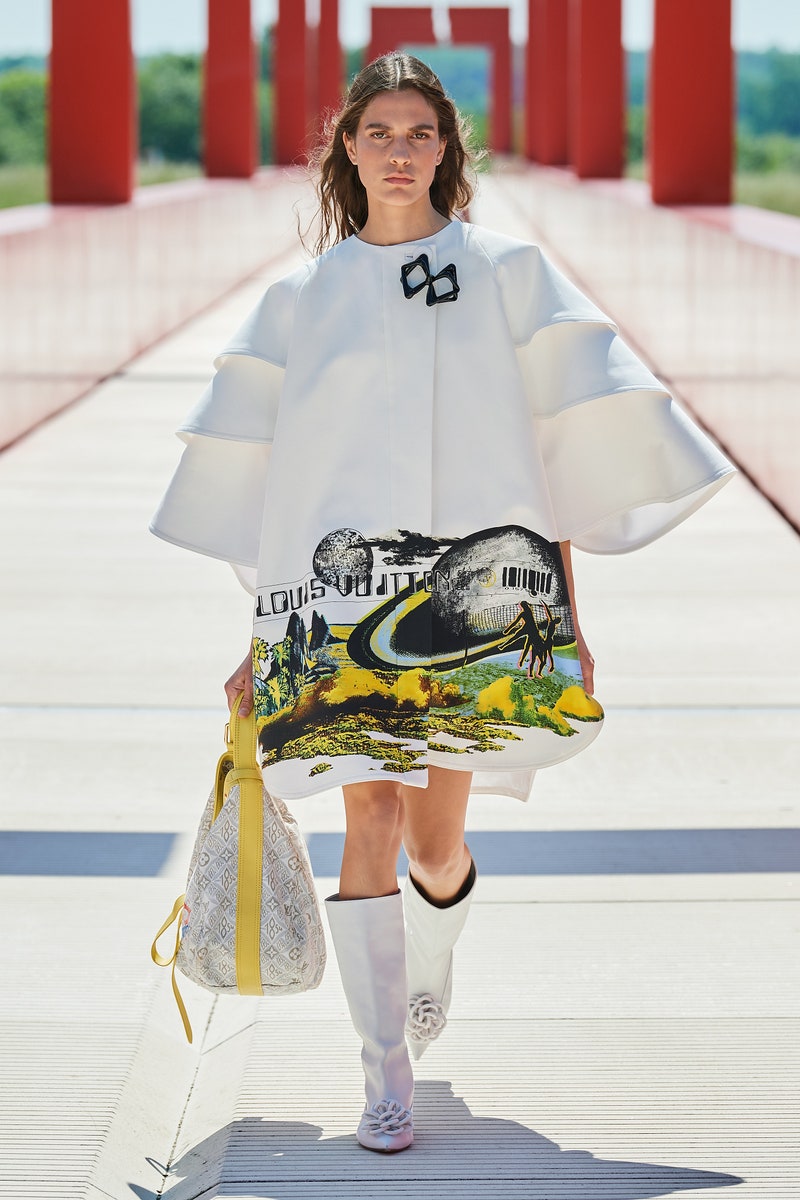 For his Louis Vuitton Cruise 2022 show, Nicolas Ghesquière imagined what our holiday wardrobes will look like when commercial space travel becomes a reality.

The show was inspired by space tourism

There’s ironic timing to the current developments in public space travel. Here we are, still somewhat trapped inside our personal spaces, hankering to get on a Eurostar, an easyJet – anything! – while Jeff Bezos is hawking $28 million tickets out into the cosmos. Space – inner, outer, and everything in between – is our post-pandemic fixation. In every way, those themes carried the Louis Vuitton Resort 2022 show. Captured around the Axe Majeur, an epic futuristic art environment in the Paris province of Cergy-Pontoise designed by Dani Karavan, the collection instigated dialogues between dimensions of space and time in a big and small-scale medley sampling the local, global and universal – and the past, present and future. “The term ‘cruise’… I won’t say it’s dated. It has a charm. It’s the fantasy of going somewhere,” Nicolas Ghesquière said on a video call from Paris after the screening.

It took place at the Axe Majeur outside of Paris

“Today, with what we’re experiencing, it’s a different approach. It’s in the scale of the presentation that I can define the term ‘cruise’: making people fantasise and see what those clothes are designed for. In reality, it’s a global collection that’s totally seasonless,” Ghesquière said. For the designer, who masters the destination cruise show, presenting his most travel-centric collection on a local site wasn’t a decision taken lightly. His choice of location perfectly reflected the mentality spawned by life in confinement this past year. Around the world, lockdowners have been exploring the space around them, making doorstep discoveries, and – surveys have shown – leaving the cities for pastures less confined. Built in the 1980s, the Axe Majeur was part of a “satellite city” project initiated by the French government to relocate Parisians to new self-sufficient towns independent of the capital. The fact that it happened to look like something from a science fiction film only enticed the futurist in Ghesquière further.

It was futurism via 1980s science fiction

“I like the concept of a stargate – an imaginary portal – that can transport us, our feelings and our wishes to someone or something we love,” Ghesquière said, referring to the Axe Majeur. “I wanted to give this jaunt of energy – a pure fashion moment in less than eight minutes – to show that those connections weren’t lost with what we experienced.” A child of the 1980s, Ghesquière has an infinite fascination with the type of futurism that hit TV screens and comic books in his youth. “I’m clearly a ritual futurist, because my vision – as you say – started in the ’80s, so it’s a strong influence on my aesthetic,” he said, nodding at the 1980s silhouette and science fiction elements that defined the collection. Landing somewhere between Star Trek and ABBA, it was an exuberance embodied by the starry-eyed ambition of the decade when shoulders were broader, hairstyles higher and dreams bigger.

Ghesquière adorned his lantern shoulders, skimpy skirts and trousers tucked into ankle boots with pictures of planets and futuristic landscapes set against earthly, “domestic things” like basketball courts and motel signs. “I don’t know why, but it was always an obsession to reflect on futurism, space conquest, and what we might call ‘the space colony’. The titans of the world are investing in it, and what looked unreal in the past is now bringing us closer to space,” he said, referring to Bezos and his fellow billionaire space cowboys. “And I have to say, I think it’s great. It’s really progressive for all of us. Those prints in a light and fun way are about the domestication of our future conquests of those planets.” That spirit of settlement – of building new communities – was also what inspired the majorette outfits in the second half of the show. “I always loved the idea of a community enjoying success; a marching band; people dressing for celebration,” Ghesquière said.

Nicolas Ghesquière is ready for space

For Ghesquière – and Louis Vuitton, whose very raison d’être was always travel – the space-invading themes of the collections weren’t simply metaphors for earthly holidays, or indeed cruises, but a literal step in the direction of what travel could look like in the near future. Asked if he’d like to become a space tourist, the designer smiled. “Today, I think I would say yes. But let’s see the first experimental flight… I’m not that brave! But yes, I’d be someone to get on a spaceship,” Ghesquière said. “If there’s a good look [to wear], maybe that’s another reason to travel to space!”

This article was originally published on Vogue

In this article:Fashion, Louis Vuitton, Style