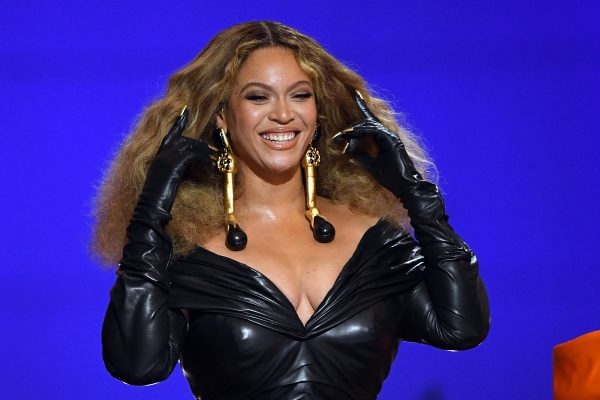 While the Beyhive has been not-so-patiently for Beyoncé’s seventh album, she has been relaxing and living her best life, traveling and spending time with her husband and three children. In the midst of it all, she still manages to give us new Ivy Park goodies and gorgeous fashion and beauty moments to praise. Case in point: In September, she looked stunning in a bright neon green eye shadow, a color we don’t often see from her. Then, two months later she showed off an emerald green and gold French manicure that we couldn’t take our eyes of.

Now, she’s impressing us once again with a silver-tipped French manicure. She shared her new nails along with her silver bedazzled outfit in an Instagram carousel with 10 pictures. On the seventh slide, you get a clear view of this metallic mani. Her long nails were shaped into an almond shape, which is a style she tends to wear. The silver C-curve tips cover almost half of each nail for a dramatic look. The other half of the nail was left transparent instead of a light nude hue.

In addition to the French manicure, her nail artist added tiny black geometric shapes underneath each tip. Each nail has a different shape — for example, the pinky nail has a small black triangle while the index finger has a small square instead. These teeny black figures give this French manicure an unexpected twist that we’re loving.

French manicures have had a revival in popularity, particularly with tips in colorful pigments rather than the whites of many of our youths. The traditional manicure is also not going anywhere, according to nail artists who told Allure they predicted the style to go strong well into 2022. We’re loving all of these remixes Queen Bey has done on all her nails and can’t wait to see what other nailfies we get as the year ends.

This article was originally published on Allure