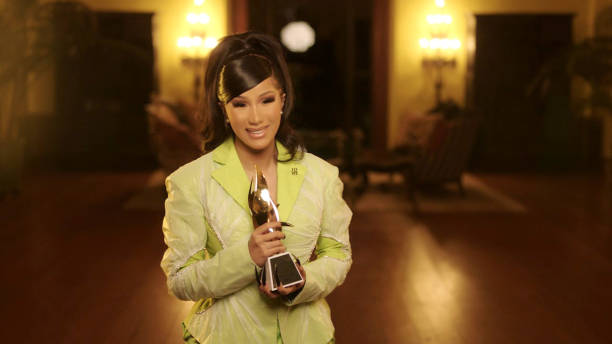 During her acceptance speech for Billboard’s Woman of the Year, Cardi B addressed the critics that brushed off “WAP” as vulgar. When the song was released back in August, Ben Shapiro read the lyrics aloud and seemed to mock it, but Cardi dismissed the criticism, telling Billboard that the whole situation was simply “weird” and that she was happy that “WAP” started conversations and that anyone who thought it had crossed the line wasn’t who the song was for.

“This year, when it came to music, I had so many things planned. I had so many projects that I wanted to come out,” she said of her award. “Unfortunately, due to COVID, I couldn’t put out the visuals the way that I wanted, it messed up my creative space. I think everyone this year was just messed up.”

She noted that “WAP” broke records, becoming the largest opening streaming week for a song in U.S. history in addition to debuting on top of the Billboard Digital Song Sales, Streaming Songs, Hot Rap Songs, and Hot R&B/Hip-Hop songs charts.

“So I’m just grateful and thankful that the song that I actually did put out this year, which was ‘WAP,’ featuring Megan Thee Stallion, not only was it an amazing song that broke so many records, but it was a conversation that I never thought was going to be so big,” she added. “It pissed off a whole bunch of Republicans for no reason. It was just weird.”

Cardi also told aspiring rappers — female ones, especially — that they could follow her lead, sticking to their beliefs and persevering through adversity.

“When I came into the music industry, I didn’t know if these people were going to accept me,” she finished. “Throughout the years, if you listen to my mixtapes and you listen to my music now, I have progressed because I wanted to progress. I want to be the best I can at anything I do and, you know, you got to put your mind to it.”

“First of all, I wanna say thank you to Cardi for even putting me on the song,” she told Stephen Colbert. “But, I mean, I felt like that was really, like, a little weird. I know the Republicans have been having a bad year and they probably needed to take their frustration out somewhere.”

“But I wanna tell them thank you for the streams!” she added. “Because without you, I don’t know if we would’ve been here! But no, them people crazy — why you worried about my WAP?”

This article was originally written on Instyle

In this article:Billboard Award, Cardi B, Celebrity, Entertainment, News