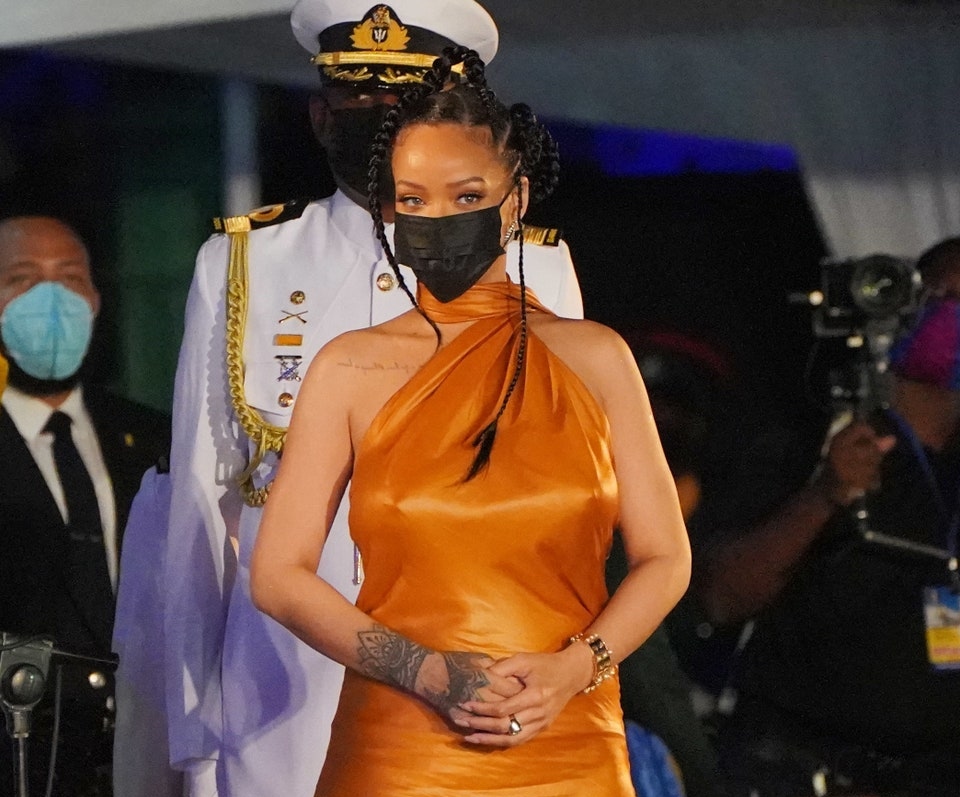 In 2010, Rihanna went through a red phase. Coinciding with the release of her killer studio album, Loud (thank you, Rih), the singer dyed her hair cherry-red, prompting members of the Navy (her fanbase) to follow suit. These days, she dresses in all colours of the rainbow, and is never afraid to sport a single, searingly-bright shade from head to toe.

Citrus colours are among her favourites. Rihanna was a tangerine dream for an outing in New York this week: she shrouded herself in a fuzzy oversized orange coat with a matching orange hoodie, camo trousers and crystal-encrusted shoes from Gucci and Balenciaga’s “hacker project”

In fact, orange has been incorporated in some of the star’s most defining moments. For her September 2018 British Vogue cover, photographed by Nick Knight, she wore orange Prada gloves.

In February 2020, for the Bergdorf Goodman Fenty launch, she wore head-to-toe orange – courtesy of her very own Fenty line – a knitted turtleneck dress, a trench-parka coat and her signature parachute boots. And when she was officially declared a “national hero” in her native Barbados, she marked the historic moment in an orange Bottega Veneta dress.

Evidence of her orange obsession can be found on Instagram, too. Rihanna’s summer was particularly fruity: in the space of a month, she posted several orange-tinted pics, including a silky Fenty Beauty campaign for which she wore LaQuan Smith, and a snap of her wearing an orange Chanel jacket, holding a matching Chanel camera flap bag. Meanwhile, a picture she shared suggested that her orange love affair is no new thing – she posted a childhood picture on Santa’s lap wearing an orange T-shirt and jeans.