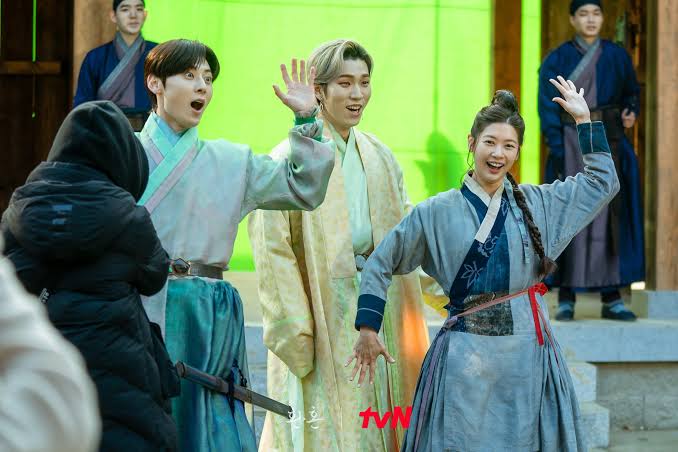 It’s no doubt that Korean movies are growing bigger all over the world and due to the outstanding storylines that deliver suspense, action and romance, it’s no surprise that people prefer K-Drama to Hollywood movies nowadays.

Nigeria is not left out as we also enjoy watching K-Drama. Ladies prefer this because of its lovey-dovey scenes.

The first half of 2022 delivered entertaining, gripping and enticing works that would surely hook new fans, and even avid K-Drama junkies, until the end.

If you’re looking for an excellent and well-written series to binge this week, then scroll further.

Rather than the usual slow burn stories, Kim Sejeong, Ahn Hyo Seop, Kim Min Gyu and Seol In Ah’s “A Business Proposal” is a fast paced romance drama with no room for boredom!

About: The movies follows the story of a company employee who goes on a date with the CEO while hiding true identity.

Throughout its broadcast, the drama received impressive feedback, and an average rating of 9.3%. Fans even begged for a new season as the drama only consisted of 12 episodes in total.

This movie took a different turn as it was suspense filled and gave romance a new dimension. Also, it is filled with lessons for young individuals who are trying to reach their goals.

“Twenty Five, Twenty One” is a fusion of love, sports and dreams-which appeal to viewers.

About: It depicts the romantic pursuits of two young adults whose fates were tested by time and unexpected circumstances. The drama took the viewers on a roller coaster ride of emotions, making them laugh, cry and fall in love.

The movie recorded an average rating of 9.6%, and it is a drama that will surely go down in history.

About: It follows the story of an autistic lawyer who thrived inside the court room, fighting injustices and discrimination. Although it premiered with a rather low rating, “Extraordinary Attorney Woo” gradually got higher and received a total score of 11%.

Here is one movie with suspense. The 16 episode movie glued viewers to their screens with its detective storyline and performance.

Cha Woo-In (Jo Bo-Ah) comes from a wealthy chaebol family and she works as rookie military prosecutor. She is confident and does not fear powerful people. She has excellent investigation skills for someone her age. Cha Woo-In also became a military prosecutor to seek revenge.

Do Bae-Man & Cha Woo-In begin to work together as they break down evils in the military. During this time, Do Bae-Man grows into a real military prosecutor.

Who loves a drama that incorporates the themes of family, sensitive and relevant issues and romance? Then this drama, “Our Blues,” is for you!

About: “Our Blues” is an omnibus drama starring Han Ji Min, Lee Jung Jae, Shin Min Ah and more that tells the stories of people who live in the quaint village in Jeju.

Despite the movie’s slow pacing, fans still loved the drama and the characters’ stories that the viewers resonated with. The series enjoyed an all-time high streak, and recorded an overall average rating of 9.9%.

The drama captured the attention of viewers from all over the world, and delivered a great watching experience for 10 long weeks.

About: The series depicts the stories of mages whose lives are controlled by fate and magic. Throughout the drama, “Alchemy of Souls” gave an unforgettable impact thanks to its outstanding cast, garnering a total score of 9.9%.

What is your favourite movie on this list and which other movie should be added to the list? Drop your comments below.