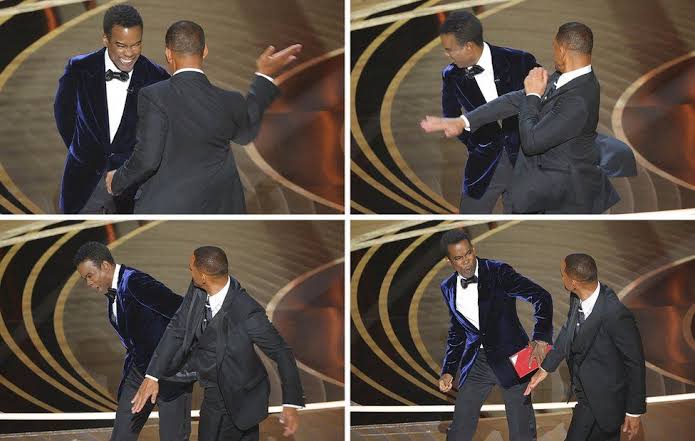 What seemed like a quiet evening at the Oscars, turned out to be one of the greatest moments in television history that doesn’t seem scripted. At a certain moment, comedian Chris Rock hit the stage to tell a few jokes. He decided to talk about couples such as Javier Bardem and Penelope Cruz and then he turned to Will Smith and Jada Pinkett Smith. He mocked the actress and her bald head by asking when the G.I. Jane sequel was coming out.

All seemed well until the cameras spotted Will Smith approaching Chris on the stage. Suddenly, he proceeded to smack the comedian and return to his seat. Rock was floored as the rest of us were, he attempted to ask Will to chill but Smith wasn’t having it.

“It was only a G.I. Jane joke man,” responded Rock. But will simply kept repeating: “Keep my wife’s name out of your f**king mouth.” The entire audience at Dolby Theatre was shocked by what they witnessed. After Rock presented the award he got on stage to present, the entire room started talking about what just happened.

Initially, the first reaction was to see if it was scripted but the moment seemed quite genuine. Rock was shocked, Will Smith seemed pissed off and Jada Pinkett clearly didn’t like the punchline of the joke. But there must be more to what happened in one of hte most surreal moments in Oscars’ history.

Following the drama which occurred, lots of reactions surfaced online, of course, ranged from delighted memes to concern. Some supported Smith, including the actor’s 23-year-old son Jaden Smith, who wrote on Twitter minutes after the ceremony: “And That’s How We Do It.”

Denzel Washington and Bradley Cooper were later seen comforting Will Smith at the 2022 Oscars after the “King Richard” star slapped Chris Rock over a joke he made about his wife, Jada Pinkett Smith, being bald.

The Hollywood Reporter’s columnist Scott Feinberg captured the moment when Washington approached Smith during a commercial break and shared it on Twitter Sunday night.

He captioned the clip, “During the commercial break, Will Smith is pulled aside and comforted by Denzel Washington and Tyler Perry, who motion for him to brush it off.”