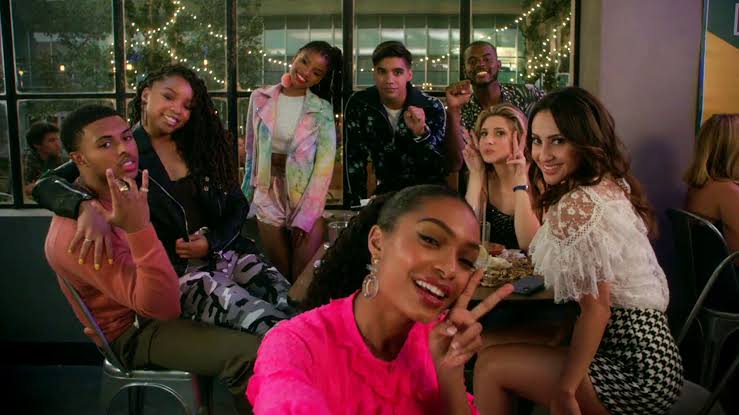 Senior year at Cal U is about to end, which means Zoey and her friends will be facing some difficult decisions in love and life.

We’ve got the exclusive first look at the trailer for the second half of grown-ish’s fourth season and it all builds to graduation when Yara Shahidi‘s character Zoey Johnson will face the tough choice of pursuing her fashion dreams with ex Luca (Luka Sabbat) or being with her boyfriend Aaron (Trevor Jackson).

“Luca is just an annoying pest that likes to interfere between me and Zoey,” Aaron says.

The summer finale, which marked the first half of season 4, showed Zoey desperately needing to find an internship to finish a graduation requirement. Ultimately, Luca offered her an opportunity with his Anti-Muse clothing brand, which was first created and inspired by their breakup.

“The only reason I gave her the internship was to help a talented friend,” says Luca, who looks to be spending a lot of personal and professional time with Zoey

Things get complicated for Zoey when Aaron receives a prestigious grant that will take him to the University of Johannesburg. Before he asks her to go with him to South Africa, Luca gets an intriguing offer to officially launch the Anti-Muse clothing line after an investor shows interest.

Luca wants me to go with him to New York to launch a brand which I helped build,” Zoey tells Aaron.

“I don’t want to be the petty boyfriend who comes between you and your career,” he says to her, later confronting Luca at his place.

“Launching could be the opportunity of a lifetime but so is traveling to Africa with Aaron,” Zoey says.

Elsewhere in the upcoming season, Jazz (Chloe Bailey) still has conflicting feelings about dating Des (Warren Egypt Franklin) due to his fashion choices, namely his affinity for dresses. Jazz confides in her ex Doug (Diggy Simmons) who appears to still have feelings for her.

Meanwhile, roommates Ana (Francia Raisa) and Vivek (Jordan Buhat) are facing the reality of sleeping together. The first half of season 4 ended with them in bed together and now, Ana tries to only make it a “one-time thing.” However, they can’t help themselves.

And Nomi (Emily Arlook) finally introduces her daughter Luna to ex Phil (Tommy O’Brien), who recently learned that he was the child’s father.

Fans of black-ish will be also treated to appearances from Zoey’s family, including Dre (Anthony Anderson), Rainbow (Tracee Ellis Ross), Pops (Laurence Fishburne) and Ruby (Jenifer Lewis). The Johnsons attend Zoey’s graduation ceremony and discover that Zoey could be a no-show as the professor repeats her name multiple times but to no avail.

The second half of grown-ish season 4 premieres Jan. 27 on Freeform.

This article was originally published on People