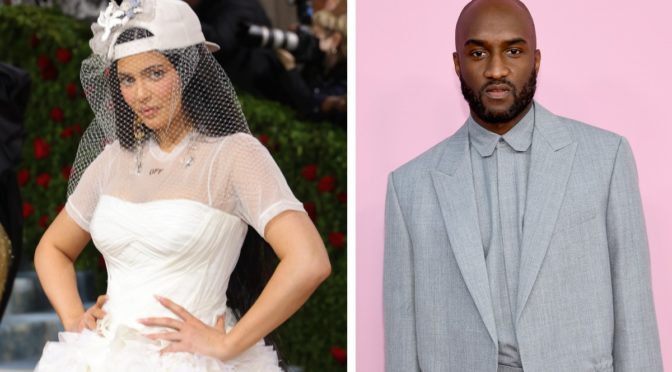 Kylie Jenner already knew people would have a negative reaction to her Off White dress, which she wore to Monday’s Met Gala in New York. And on Tuesday, the reality star and mother-of-two gave fans a glimpse into her life as she documented her journey to fashion’s biggest night in a video posted to her YouTube channel, showing how she and her team prepared for the occurrence and why her custom-made “Poetry Dress” was sentimental to her.

In the nine-minute video, the cosmetics mogul revealed that the Couture gown was the final design by the late fashion designer Virgil Abloh, who died in November 2021 following a two-year battle with cardiac angiosarcoma. Along with many of her family members, Kylie shared a close bond with Virgil throughout his time working as the artistic director of world-renowned fashion house Louis Vuitton. The dress Kylie wore to the Met Gala was her way of paying tribute to her pal, saying she had no plans to attend the event but ended up changing her mind so long as she could wear Off-White.

“To be honest, I decided really last minute I wasn’t gonna go. I was like ‘Unless I can go and honor Virgil [Abloh]‘ and [his wife] Shannon would want me to go and I would wear Off-White, then that’s the only reason I would go today. To honor him.” Kylie revealed she and Virgil initially planned to collaborate on an ensemble for the 2020 Met Gala before Anna Wintour decided to pull the plug amid growing cases of Covid infections — and given that she didn’t attend last year due to her pregnancy, this was the most fitting time to honor him.“It also puts off the pressure of what people think about my look because I love it so much. It’s so much more special to me that I don’t care what people think. It’s very special,” she added.

Earlier this month, it was quite the victory for Kylie, her sisters, Khloe Kardashian, Kim Kardashian, and their mother, Kris Jenner, after a judge threw out Blac Chyna’s $100 million defamation case. The family is not required to pay any money in the suit filed by the Lashed founder, who claimed that the famous clan has conspired to get her reality show, Rob & Chyna, canceled following a physical dispute with her ex-boyfriend Rob Kardashian in December 2016.

The jury concluded that none of the Kardashian or Jenner members had defamed Chyna or prevented her from continuing her working relationship with E!, which comes as a blow to the 33-year-old, who alleged that a second series of her show was pulled due to the emails that were exchanged between E! producers the Kardashians.

This article was originally published on HollywoodUnlocked.