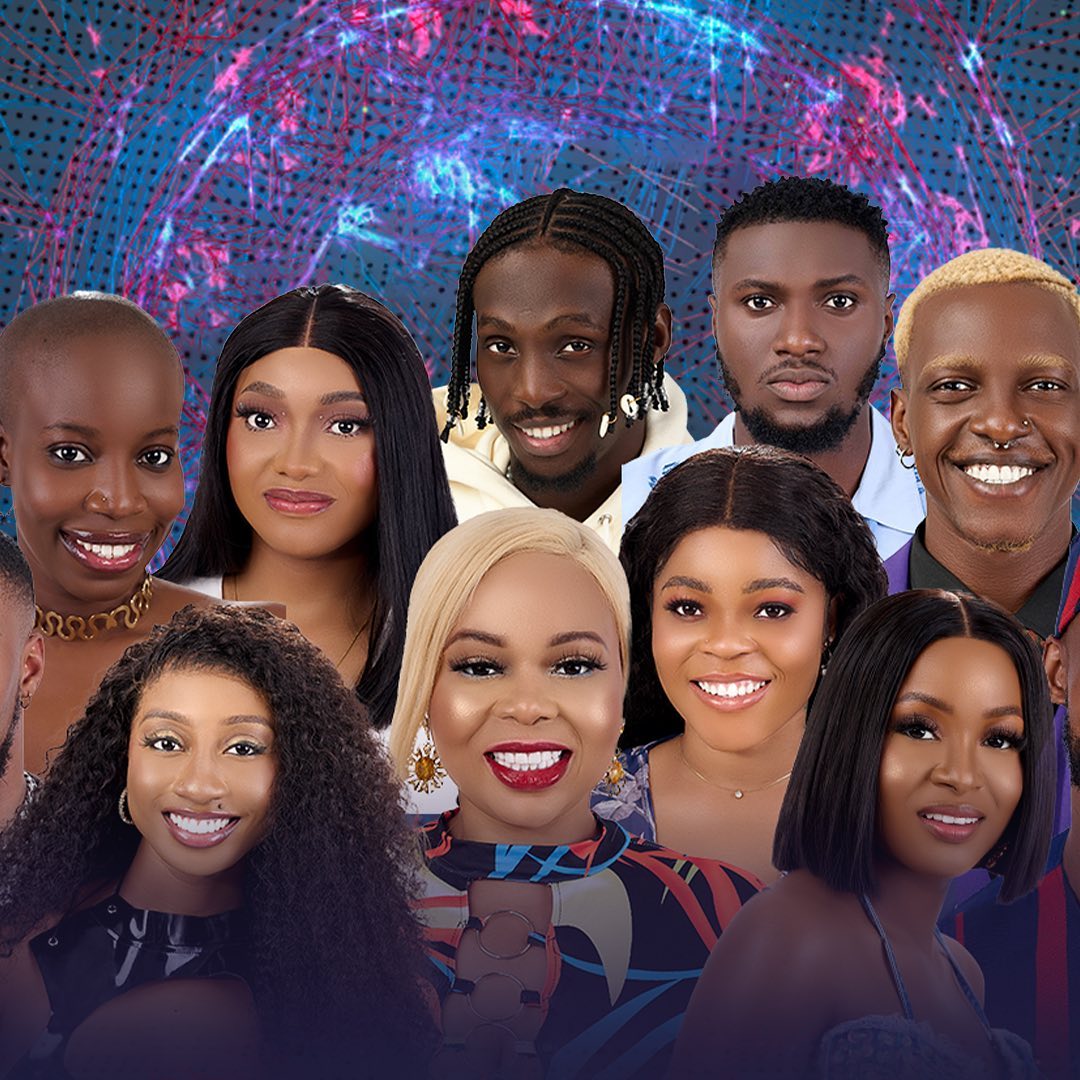 The waiting is over as Big Brother finally revealed the remaining 12 housemates of the Big Brother Naija season 7 show.

And they were all directed to another part of the Big Brother house. The first person for the second set is Bella. She gave a perfect example of the saying “eat now, worry later.”

Here are the remaining 12 housemates of the Big Brother Naija season 7 show.

The thirteenth housemate to enter the house is Bella. She is 25-years-old and a graduate of UNILAG.

She loves travelling, swimming, photography, and making new connections. She considers herself “a no-nonsense person who gets pissed off easily” and is competitive because she likes winning.

Bella admits most of her friends are male because she doesn’t get along with girls. “It always leads to jealousy and gossip,” she says, two things she tries to avoid at all costs. What habits are most likely to irritate her fellow Housemates? “My bluntness. I am fearless, so I don’t sugar-coat my words. I tell it like it is, and people hate to hear the truth”. Bella decided to sign up for Big Brother Naija because she wants to be rich and famous. “I do not ever want to introduce myself. I want to walk into a room and be recognised. I love a life of comfort and intentional happiness”.

The fourteenth housemate is Eloswag from Delta state. “I am entertainment as a whole. I’m multi-talented,” he says. We should expect love, light, dance and music from him. “I’m here to have fun”. He’s got the energy

Eloswag is a 27-year-old digital marketer and content creator from Lagos. Apart from being lively, confident and talented, Eloswag, who counts his mom as his superhero, reckons he is a hit with the ladies.

“I’m a great guy and the ladies love me,” he says with a laugh.  Eloswag is single at the moment and confesses he is in no rush to get boo’d up because he has been “served his breakfast” a couple of times. “Besides, I feel relationships only work better if you have money”.

The fifteenth housemate is 26-year-old Doyin and she is from Ondo State. She says her personality is a mix of Michelle Obama and Cardi B. She says she’ll bring excitement, positivity and happy vibes… then disrespect people who don’t respect her.

Doyin is hoping Big Brother Naija will help change the direction of her life. “I find medicine incredibly boring and I want to see if there is anything for me in the entertainment industry. Also, I just want to make more money than I’m currently making,” she says.

The sixteenth housemate is Adekunle and he is a 27-year-old digital marketing consultant from Lagos: He loves solving other people’s problems. He says it’s his time. “I’m actually a troublemaker. If the need be, I’ll become an Agbero.” Says he’s coming with the Lagos island swag.

Although peace-making is one of his strengths, Adekunle is not afraid to step up and face challenges head-on should the need arise. Are there any habits that may annoy his fellow Housemates? “The fact that I’m always right; and by the way, I never say anything I don’t know, could be considered annoying.

The seventeenth housemate is Allysyn. She says she’ll be bringing excitement and good content. Adding that her ability to mix with people and get them to trust her is something that’s unique about her. She’s obsessed with lipgloss.

She enjoys watching movies, modelling, hanging out with friends and making her own lip gloss, when she is not hard at work as a Sales and Marketing Executive for a popular vehicle brand.

She considers herself a loyal friend and expects the same energy from those closest to her. As a “huge fan of love”, Allysny is currently in a relationship and enjoys “how love helps me see myself in a new light every day”.

The eighteenth housemate is Dotun from Ekiti State. He is 26 years old and works in a hospital as a medical physiologist and moonlights as a personal trainer on his days off.

He loves working out, watching movies and going on dates. He says he’ll be bringing fun, energy and a high dose of sexiness.

He describes himself as “fun, good looking and spontaneous” and admits he never backs down from a challenge. Dotun has aspirations of taking over the entertainment industry and counts being crowned Mr Tourism Nigeria 2018 as a proud moment, alongside graduating as one of the University of Ibadan’s top students in his speciality a week later.

The nineteenth housemate is Chomzy. She is a 22-year-old entrepreneur. She says her kindness and generosity are what make her special. She also says pride and anger are what people hate the most about her. She adds that she’s the life of the party.

Chomzy reckons she has the best family in the world. “My mom and siblings are all in Nigeria, and my dad is in Gabon. My family gets along very well and we love each other, but I’m everyone’s favourite,” she says with a smile. Although single, this firecracker is open to love when the time is right.

Some of Chomzy’s proudest moments come courtesy of her pageant and modelling work, as well as the multiple awards she has received for her humanitarian and school work.  Chomzy hopes Big Brother Naija will make her rich and famous. “I want to be successful in my business and I want to find love too”.

The twentieth housemate is 24-year-old Giddyfia. He says he’s a team player and enjoys laughing around in serious moments. He’s so excited to be here. Says he added Davido’s ‘fia’ to his name ‘Gideon’ = Giddyfia.

Prone to laughing and joking during serious moments, Giddyfia respects friendships and tries to avoid drama and betrayal at all costs. He has many friends but is careful to let only a few people in.

One of his favourite achievements is graduating from university with top honours. He is a fitness buff and even won the 2019 ‘Male Physique of the Year’ award in college. Giddyfia feels he will make a good Housemate because he is kind, caring, smart and fun to be with. “There are things about me that people will love to see and emulate,” he says.

The twenty-first housemate is Diana, a 33-year-old Project Manager from Edo State.

She was born in France but now calls Abuja home. She is sociable, family-oriented, passionate about self-development, and loves learning about new cultures.

Diana values friendship and beliefs in treating people the way she would like to be treated; with love, loyalty and respect. When asked about romantic relationships, Diana confirms that she is single. “Guys perceive me as sophisticated, high maintenance and too expensive to approach. When they eventually get to know me, they realise I am actually a very lovable and down-to-earth person,” she says.

The twenty-second housemate is Hermes. He says he’s bringing fun, originality, and everything that comes with his person. He says he’s in an intimate relationship with “two amazing queens.”

He is in a polyamorous relationship with two women and feels this kind of partnership has left enough room for everyone in it to grow individually and collectively. One of his favourite traits is honesty.” I’m one, to tell the truth, but over time I’ve realised many people are not particularly fond of perspectives they don’t agree with, so I tell the truth, but diplomatically,” he says.

Hermes counts basketball, public speaking and American flag football as some of his interests. He has had the opportunity to perform some of his original dance pieces at reputable festivals in Lagos, Glasgow and Rotterdam, and has also appeared in music videos for afrobeat stars including Burna Boy, Davido and Ajebo Hustlers.

Although she had a painful childhood, Chichi has managed to rise above it all and continues to forge her own path. She admits her bluntness can sometimes tick people off, but she doesn’t mind because she believes in sincerity. “It’s either I say things the way they are, or I don’t say it at all”.

Chichi wants to be on Big Brother Naija to show people that there is more to this stripper than meets the eye. “I have so many things to showcase and I believe the world really needs to see me. The Big Brother Naija House is the only place that will bring me that kind of spotlight,” she says. Her hidden talent? Working the pole, of course!

The twenty-fourth and last housemate is Sheggz. He is 26-year-old and he says he’s a mix of London and Lagos. He’s a professional footballer and an actor. He’s single right now, and he’s open to something if he meets the right person.

After sustaining an injury last year, he started acting again and recently scored a role in a production directed by Tola Odunsi.

Although currently single, he loves relationships but believes it is important to find the right person. “I think it’s important to settle down with someone you genuinely connect with and not just for vibes,” he says.

Why Big Brother Naija? Sheggz believes he has a lot to show the world. “Nigerians have talent, we have swag, we have vibes, we’re smart, we’re ambitious and to be honest, we’re all over the world smashing goals and achieving”.