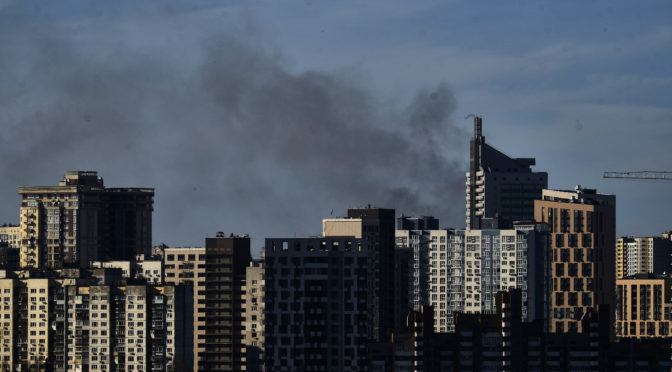 KYIV, UKRAINE - FEBRUARY 26: Smoke is seen rising from buildings on February 26, 2022 in Kyiv, Ukraine. Explosions and gunfire were reported around Kyiv on the second night of Russia's invasion of Ukraine, which has killed scores and prompted widespread condemnation from US and European leaders. (Photo by Pierre Crom/Getty Images)

Putin reportedly issued a directive to increase the readiness of the country’s nuclear weapons, leading to fears of a potential nuclear war. A senior U.S. defense official said Putin is “potentially putting in play forces that, if there’s a miscalculation, could make things much, much more dangerous” as reported by the Associate Press.

The latest update comes as Ukraine has shown resistance against Russian military forces but officials from the U.S. believe the invasion has become very difficult and, slower for Russia.

Additionally, Western nations will continue to tighten sanctions against Russia and will deliver weapons to Ukraine which will include Stinger missiles. As previously reported, Western officials believe Putin wants to overthrow Ukraine’s government and wants to take over.

In Kyiv, the mayor has encouraged citizens with military experience to defend the capital city and will also allow prisoners with similar experiences to train others on how to make bombs.