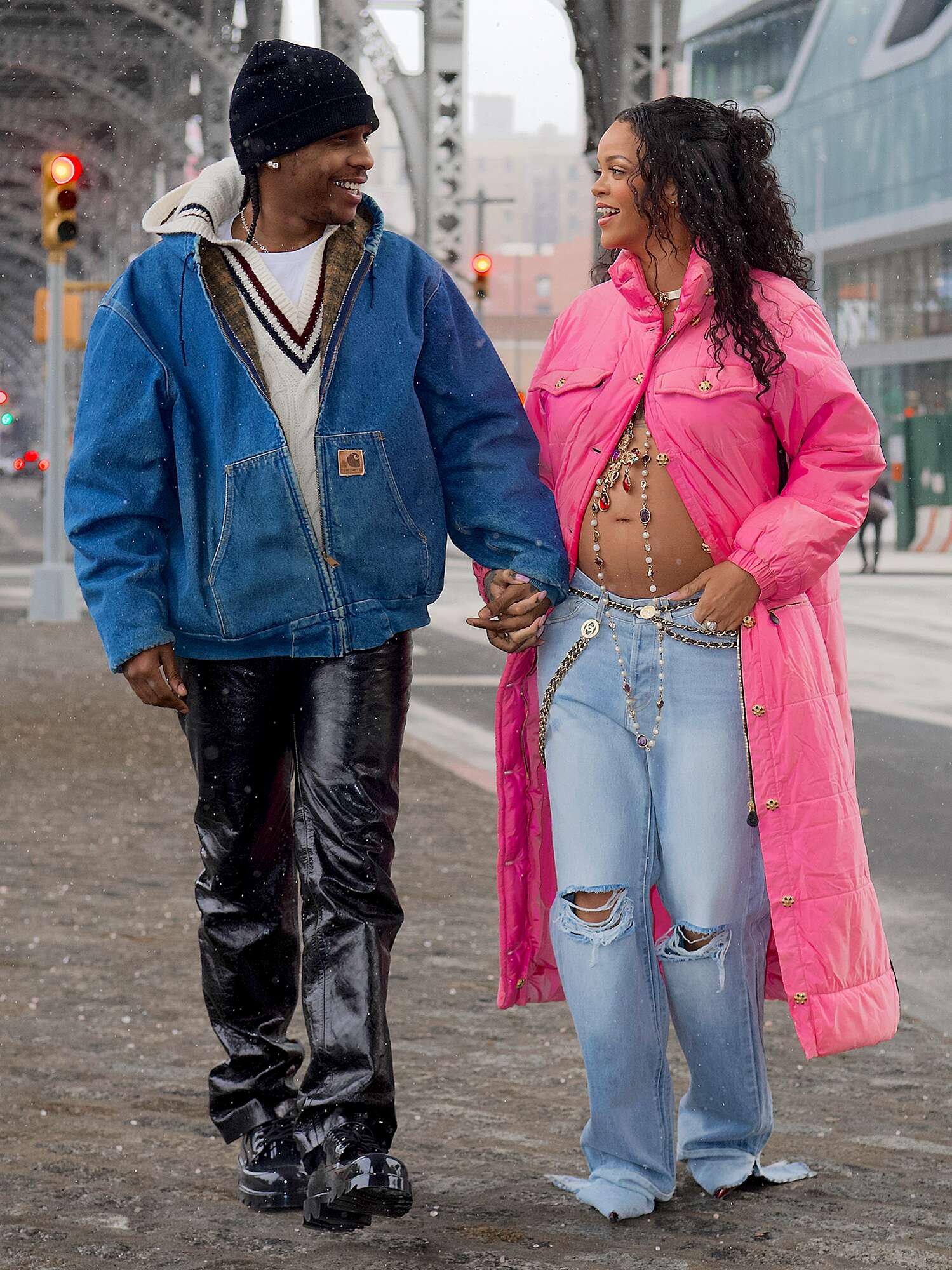 Rihanna is set to be a Mom for the very first time ! She was spotted out in NYC with Boyfriend, ASAP Rocky this weekend, shocking the world with her baby bump on full display. The inseparable pair stepped out in Harlem, his hometown, and were seen looking happier than ever. Rihanna’s bare bump was adorned by an elegant gold cross with colorful jewels, as she leaned into her boyfriend’s tender kiss on her forehead. She looked absolutely radiant as they enjoyed a walk in the snowy brisk air together before headed back to their new apartment together to prepare for parenthood. MANDATORY BYLINE - DIGGZY/Shutterstock

The “Diamonds” singer and fashion mogul, 33, is pregnant, expecting her first baby with rapper A$AP Rocky.

The couple was photographed out in New York City over the weekend, where Rihanna debuted her baby bump while wearing a long pink jacket. Her oversized outerwear was unbuttoned at the bottom to reveal her growing bump adorned in a gold cross with colorful jewels.

In one of the sweet photos, which were snapped in Harlem, where A$AP Rocky grew up, the rapper kisses the soon-to-be mom on her forehead as they enjoy a snowy walk outdoors.

Back in May, A$AP Rocky told GQ about his romance with Rihanna, calling her the “love of my life.” When asked what it felt like to be in a relationship, he said, “So much better. So much better when you got ‘the One.’ She amounts to probably, like, a million of the other ones. I think when you know, you know. She’s the One.”

In regards to fatherhood, A$AP Rocky, 33, said starting a family is “in my destiny, absolutely.” As he put it at the time, “I think I’d be an incredible, remarkably overall amazing dad. I would have a very fly child. Very.”

A source confirmed to PEOPLE in November 2020 that Rihanna and A$AP Rocky were dating after years of friendship. The couple had sparked romance rumors since Rihanna split from her boyfriend of three years, billionaire Hassan Jameel, in January 2020. That July, she featured A$AP Rocky in her Fenty Skin campaign, and the duo did several interviews together to promote the collab.

Rihanna previously opened up about family planning, telling British Vogue in March 2020 that she was “realizing life is really short” and found a new no-nonsense approach to living.

“You don’t have a lot of time to tolerate s—-, you know? You put so much on your plate. When you’re overwhelmed, you need to start cutting things out. And I’m overwhelmed too much,” she said at the time. “What’s happening now is that I’m going back to black and white. My gray area is shutting down.”

“I know I will want to live differently,” she added, saying that within the next 10 years she sees herself having “three or four” children, whether she has a partner or not.

This article was originally published on People

In an interview with BellaNaija, Mo Abudu, the executive producer of Nigeria’s first Netflix original series “Blood sisters” and Kate Henshaw, who played the...